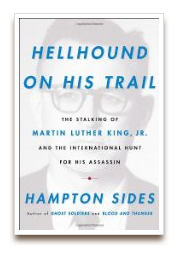 A new book focuses on a Missouri penitentiary escapee and how he stalked Martin Luther King and murdered him. It’s the second book Hampton Sides has written about a famous Missourian. He previously had written about frontiersman Kit Carson.

His new book is “Hellhound on his Trail; the Stalking of Martin Luther King and the International Hunt for his Assassin.” The Hellhound is James Earl Ray, an obscure mid-level criminal who escaped from the old penitentiary by hiding in a bread truck.

Sides says Ray came from a family with a long history of racism and said in prison that killing the man he called “Martin Lucifer Coon” would be his retirement plan. But it was not until March 18, 1968, a year after his escape, that he decided to murder King after King spoke in Los Angeles, a couple of miles from the place where Ray was living under an assumed name. Sides says that’s when King headed to Atlanta where he started mapping King’s movements. Seventeen days later he tracked King to Memphis and killed him. Ray fled to Canada and eventually to London where he was arrested 65 days after the killing.

Sides says King was not involved in any conspiracy although his book has had “zero” impact on people who think otherwise.