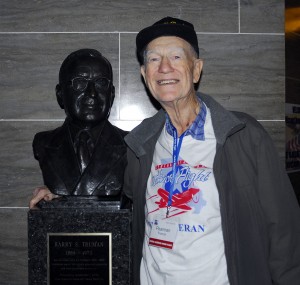 Even so, it’s not a trip for the weak in spirit. The bus departed for the airport at 3 a.m., and after a busy day in Washington, the elderly veterans will return to Mid Missouri around 11 o’clock tonight.

Francis Pearman of Moberly returned from the last trip recently just before visiting the Missouri Capitol. He says it was his first trip to D.C., where the World War II Memorial and the Iwo Jima Memorial were “awe inspiring.” It wasn’t his first trip to the Capitol in Jefferson City though. He said he’d been there in 1938.

Honor Flight runs solely on private donations and has flown nearly 500 veterans from the Show-Me State to the memorial that pays tribute to them, the 16 million who served in the armed forces of the U.S., and the more than 400,000 who were killed in World War II.

Congressman Ike Skelton greets the veterans when they arrive in Washington.

“I’ve met most of them at the World Ware II Memorial,” Skelton said, “but I met one group at Arlington Cemetary.”
Beck explained that in addition to the World War II Memorial, they take the veterans to other points of interest if time allows.

“It means awful lot to these guys that you take the time to visit with them,” he told Skelton.

“Well you know, I grew up in World War II,” Skelton replied. “These are my heroes.”