The Riverview Gardens School District in North St. Louis has been struggling for several years now, and the State Board of Education has decided more drastic steps need to be taken. 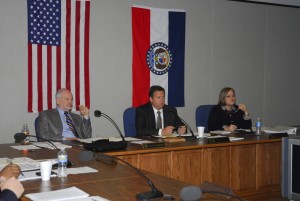 The Riverview Gardens School District school board has been dissolved, effective July first. The school has already lost its state accreditation. The State Board sites a lack of student performance for its decision to appoint a special three-person committee to oversee the district.
Commissioner of Education Chris NiCastro says state education officials have met with the Riverview faculty and staff to discuss the transition. She says the school welcomes new leadership and collaboration to implement positive changes there.

The state has three times before assumed control of failing school districts. Twice, the failed attempts at turning the district around have resulted in closing the schools altogether.

Robert Taylor is the Department of Education’s supervisor for the St. Louis area. He says after keeping a close eye on the Riverview district, it’s evident things aren’t going to change on their own.

“On a monthly basis, we have met with the Riverview Gardens co-superintendents over the past two and a half years, and we feel … that we see no appreciable growth with regards to student performance. At best. And I think that speaks for itself.”

Previous Post: « Landis confesses and throws out strong allegations
Next Post: He doesn’t care for the conclusion, but backs the action (AUDIO) »