The U.S. Senate has passed a measure that increases Wall Street oversight. 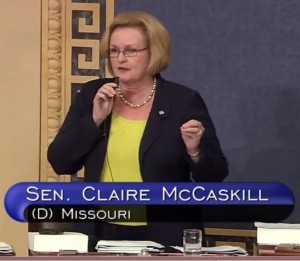 Senator McCaskill sponsored the amendment, which passed on a 75-21 vote. She drew on her political experience in Missouri when urging her colleagues to approve the measure.

The amendment increases the role of inspectors general who lead investigations in the financial sector, and it forces them to collaborate on their findings.

McCaskill sponsored the amendment with Iowa Senator Grassley, a Republican.

McCaskill says some inspectors are appointed by agencies; some by the President. She says it’s a bad idea to change right now how they’re selected because the U-S needs continuity and consistency.

“What we have done is changed the fact that these inspectors general will report to the entire boards they serve and not just the head of the agency,” she says, adding that will put an end to “cozy” relationships, which is when “people get into trouble.”

McCaskill says there needs to be “a cop on the beat as it relates to agencies.” She says it was the failure of oversight that “we got into this mess in the first place.”

“This amendment will create a council of inspectors general in the financial sector,” McCaskill explained to the Senate. The SEC, CFTC, FDIC … “They’ll have to meet four times a year. They’re going to have a forced opportunity to compare notes, talk about investigations, make sure they’re not duplicating each other’s work. But most of all to talk about systemic risk. And are they getting at it?”

She says it’s a smart plan and it doesn’t cost anything.

Also, “What we have done is changed the fact that these inspectors general will report to the entire boards they serve and not just the head of the agency. That’s where you can get the cozy relationshihp and get into trouble and that is why this amendment is needed.”