Congressman Ike Skelton (D-West Central Missouri, 4th District) met with leaders from the Disabled American Veterans at Country Kitchen in Jefferson City to see what kind of assistance they need to better serve those who fought for our country. 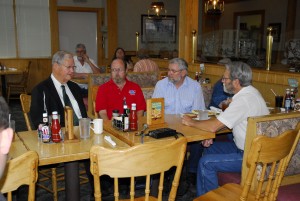 Skelton said as part of National Military Appreciation Month, he wanted to thank the veterans for their service, discuss Congress’ recent work, and hear about the challenges Missouri’s veterans continue to face.

The DAV leaders told Skelton two new clinics in Sedalia and Jefferson City have helped ease the burden from the Truman VA Hospital in Columbia. They said the care at the clinics is to be applauded for the personal interest the doctors show in their patients, their quick response time and level of care. However, they had few kind words for the VA hospital, citing a lack of personal interest — “we’re just a number” — and the lack of communication. The main problem, they said, was that few of the doctors there speak understandable English.

Regarding mental health services, the veterans told Skelton there’s a stigma tied to post traumatic stress disorder and other mental health problems those returning from combat face. They said getting veterans to admit they need help is a huge obstacle, but then when they do admit they’re having problems and get help, admitting they’ve gotten psychiatric treatment can be a career killer.

Previous Post: « Reflections on the 95th General Assembly
Next Post: IBM announces 800 new jobs in Mid-MO by the end of 2012 »