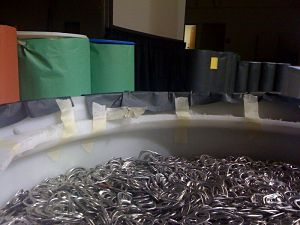 It took 13 years, but a Jefferson City middle school reached an amazing goal while completing a project to remember the victims of the Holocaust.

The man that started the drive to collect six million aluminum pull tabs was just a boy when he had the idea. Justin Perkins was a seventh grader in 1997.

“Honestly, I don’t think I had any scale (then) as to how long it would take. I thought if you started something it would be done by the end of the school year,” Perkins said.

Not even close. He’s 25 now, and is a substitute teacher in the Jefferson City School District. He was on hand at an assembly to celebrate Lewis and Clark Middle School finally reaching the goal.

Meantime, most of the current students and Lewis and Clark attending the assembly weren’t even born when the project started.

“Six million as a number is just an abstract concept, it means absolutely nothing to tell a kid or event an adult that six million people died in the holocaust, it has no meaning. But when you’re able to show them six million of something, even as small as a pop tab, and then you put it up on stage,” Perkins said.

That’s what the school did; displaying the 34 industrial-sized barrels it took to hold the tabs. 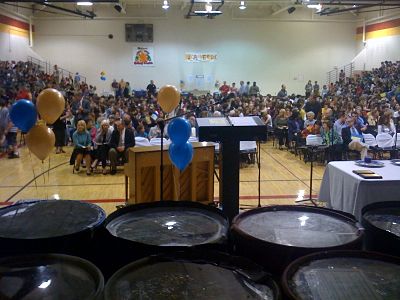 Shirley Mosinger from St. Louis was on hand, too. She lost 27 of her ancestors in the Holocaust, and wrote a letter to students years ago after seeing a newspaper article about the project. She sent them 27 tabs in the envelope, telling them they were each for one of her family members. She hopes this project leaves an impression on all the students that have worked on this over the 13 years.

“This tab is a person, from now on in their lives. A person not to be mistreated, but to be cared for,” Mosinger said.

“(Students learn) why racism is a bad thing, why stereotyping anybody is a bad thing. It just gives it a real feeling as opposed to telling a kid about six million people. It’s easy to say, ‘that’s not real, that’s just a fact in history.’ But when you can see it and see this many people working this long,” Perkins said.

Finishing the project is a remarkable accomplishment; one that a Dan Rich says may have only been done once before. He’s a curator at the St. Louis Holocaust and Learning Museum. Rich says he’s only ever heard of one other project like this ever being completed, when students in Tennessee collected six million paper clips.

“A lot of schools and organizations will start projects like this and invariably they realize they can’t collect six million of anything. They’ll stop at a million and a half, because a million and a half children were murdered during the holocaust,” Rich said.

It took more than a decade, but the school was able to do it with help from other schools and members of the community. The tabs will be donated to the museum in St. Louis, which will receive the money from the recycle value of the tabs.

Rich says this is not only a lesson for history class.

“Not being indifferent to what happens to other people, to be aware of what’s going on in the world around you, to be an upstander instead of a bystander; these are as relevant today as they ever have been in the past,” Rich said.

He points to genocides that have continued around the world since the Holocaust in places like Darfur, the Congo, and Burma.