As the papers hit the floor and the gavel hit the dais marking the end of the 95th General Assembly, Gov. Nixon expressed his praise and frustration on the legislature’s accomplishments. Or lack thereof. 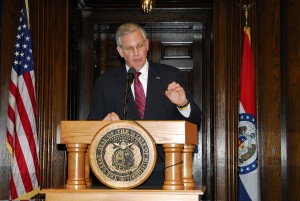 “Four months ago, I delivered my priorities for this legislative session during my State of the State address,” he said. …Create jobs and turn the economy around, pass a budget without raising taxes and consolidating state services making government more efficient and effective.

JOBS: Nixon said it’s unfortunate that the legislature missed a “critical opportunity” to pass a jobs package that would have supported the manufacturing sector, especially the auto industry, attracted science and technology jobs to Missouri, and a program that would reward loyal businesses.

BUDGET: Nixon says he’s worked to trim office space, mileage and personnel — all of which were tough decisions — and as a result, “Missouri has avoided the fiscal meltdown” seen in states such as California and Illinois. “I appreciate the legislators hard work in addressing next year’s budget as we face these difficult [economic] challenges.” He says permanent changes are needed in the way the state does business, such as cutting bureacratic red tape. He’s pleased the legislature passed a bill that merges the Highway Patrol and Water Patrol, saying “this consolidation just makes sense,” but would have liked to see a similar measure passed that would have made the Departments of Higher Education and Elementary and Secondary Education a sole entity.

MORE CONSOLIDATION: Nixon says modernizing the state pension plan and healthcare benefits and reforming tax credits would have gone a long way in saving the state money, but says the legislature fell short in implementing those measures.

TUITION FREEZE: “Missouri stands alone in the nation as a state that has frozen tuition at public institutions — both two-year and four-year — for two years in a row,” Nixon says.

AUTISM: Nixon calls the “landmark legislation” that requires insurance companies to pay for applied behavior analysis for children with autism a victory, saying it will make a difference for thousand of Missouri families.

DWI: Nixon applauds the legislation passed that will strengthen laws that both punish repeat offenders and offer rehabilitative help to violators. He says it will get dangerous criminals off Missouri roads.

ABORTION: Nixon had little to say on a bill that would strengthen the informed consent law already in place, except that he and his staff would be studying the bill closely before he makes a decision whether to sign or veto the bill.

ETHICS: Nixon called the measure that passed a “watered down” version of what was needed, but says it’s a step in the right direction. He says a true ethic bill must contain campaign contribution limits, which the bill clearing both the Senate and House does not. (The ethics debate turned ugly before a compromise was reached.)