Governor Nixon was on hand to welcome ten National Guardsmen back to Missouri after a year in Iraq, doing some very dangerous and politically important work.

“You can take great satisfaction in knowing that the impact and the benefits of your completed mission will be long-lasting. Iraq must continue to move in the direction of being both secure and self-governing, and your work for both those causes has been invaluable,” Nixon said.

After the short ceremony, the ten men were officially ‘off duty’ and able to see their families for the first time. Tara Hoskins welcomed her husband Troy back from his first tour after 25 years in the Guard.

“I did not watch the news probably the entire time he was gone, and I didn’t ask a whole lot of questions because I knew he really couldn’t talk about it; and I’m not sure I wanted to know,” Hoskins said.

“Almost 100 combat patrols during our time over there and outside the wire every other day, multiple missions. Constantly in harm’s way,” Frickenschmidt said.

The team’s main task was to train the Iraqi Federal Police; a process that has been going on for over a year. They trained the officers in the fields of operations, logistics, personnel, medical, communication, and intelligence.

“Our primary goal… was to bring them to a level; where they could operate independently and through that independent operation they could serve warrants much like the FBI or U.S. Marshalls,” Frickenschmidt said.

He says the team split into two groups to teach two different types of skills.

“Low-intensity, search types of things; kicking in the door how do you do that, when you do a traffic stop: how to stay alive on the streets… That was one half; the second half was all human targeting. Non-lethal targeting, essentially what you’d see on CSI or one of the other crime shows. Yellow sitckeys, photos yarn push pins cork board trying to figure out who’s connected to whom with link analysis,” Frickenschmidt said.

The team continued the work of two groups before them, but the ‘Federal Police Transition Team’ no longer exists now that these Guardsmen have returned to the states.

“We were the last team to work with them so they knew that they needed to get every last bit of information that they could from us. Because when we left there were no U.S. advisors left behind,” Frickenschmidt said.

Frickenschmidt says the team also spent hundreds of hours creating an intelligence network to identify more than 270 of Al-Anbar Province’s most wanted.

He says the day that his men return from a mission has always been emotional. 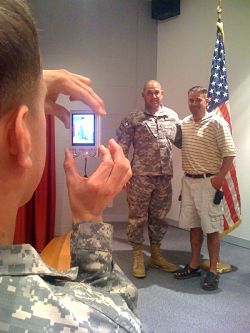 For family members like Tara Hoskins, it’s even more of a relief. Fighting back tears, she wasn’t even sure what to do now that her husband was finally back after being gone for almost a year.