The legislature has passed the budget, an autism measure and appears to be on the brink of getting ethics reform through. Governor Nixon reminds them they’re missing what — to him — is a top priority … jobs. 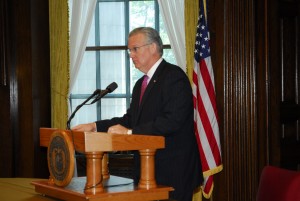 The Governor has been pushing for jobs creation throughout the legislative session. He says as we enter the home stretch — it’s time for action. Nixon made jobs his top priority when he delivered his State of the State address in January.

He says Missourians want to work hard, get ahead, have safe communities and good schools. He says jobs legislation is needed to ensure this cherished way of life is allowed to continue.

The governor says with two days left in the legislative session, there’s still time to get a bill passed that puts Missourians back to work. But Nixon expresses his frustration that jobs measures continue to stall in the House and Senate chambers.

He’s visited the Ford Plant in Claycomo and other manufacturing sites this week to garner support for legislation that puts Missourians back to work … and preserves the jobs that are at risk of being lost.

“Manufacturing and automotive jobs have been a fundamental part of Missouri’s economy for generations, but the automotive industry is changing quickly,” he said to workers in Claycomo.  “As new, innovative and energy-efficient models begin to roll off production lines, we must make sure those cars are built here in Missouri by the most talented and professional automotive workers in the world.  Our Missouri Manufacturing Jobs Act will help protect Missouri’s automotive industry, as well as other major manufacturers, and it will give us the tools we need to grow that industry in the future.  In the final days of this legislative session, the General Assembly should pass the Missouri Manufacturing Jobs Act and send it to my desk.”