The National Guard has signed a new five year deal to lease the old terminal at the Springfield Branson National Airport. 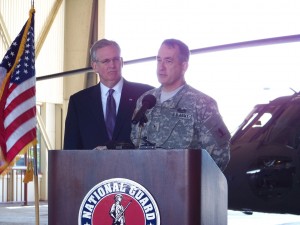 Adjutant General Stephen Danner says the Guard will move into the south end of the building. He says he’s also working on a plan that could bring more units to southwest Missouri.

Governor Nixon says the new base is badly needed. Nixon says the terminal will be a great place for the Guard to handle natural disasters. About 480 soldiers with the 1107th Theater Aviation Sustainment Maintenance Group will move into the facility to begin with.

Danner says he’s working on bringing more units to the Springfield location. He hopes to have members of the Air National Guard there eventually.

The Guard will occupy the south end of the terminal. Expedia is leasing the north end.