The State Fire Marshal is asking the community to take a good hard look at arson. It’s offering tools and strategies to combat arson in neighborhoods, business, schools and churches.

According to the US Fire Administration, more than 300,000 fires are blamed on arson each year. Nearly 8,000 people — including fire fighters — are killed or injured as a result of arson fires each year.

“In addition to needless injury and death, an estimated $1.1 billion in direct property loss occurs annually,” the Fire Marshal says.

Assistant State Fire Marshal Greg Carrell says a lot of people think of arson as a victimless crime, but everyone pays.

“It affects all of us,” he says. “It affects property values, it can affect our neighborhoods … even the opinion of a certain area, as well as increasing our insurance premium. You know, everyone pays when an insurance company has to pay out on an arson claim; a lot of people just don’t realize that.” 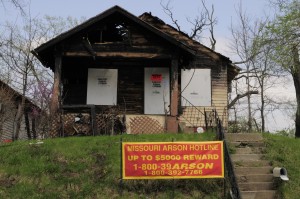 He says finding the motive of an arson case is often the hardest part of an investigation; officials are urging people to communicate what they know or hear to investigators.

“The public has always been the best source of information for any law enforcement effort, and arson is a crime,” Carrell says. “When we have an arson in any area, we certainly look to the public the local community know the area, they know what’s going on. It’s important they keep their eyes and ears open, then pass along any information they see as suspicious.”

He says the most common motives behind arson fires are insurance fraud, revenge, vandalism and covering up different crimes, such as homicide.

National Arson Awareness Week is May 2 through 8, with this year’s theme being “Community Arson Prevention.”

The US Fire Administration recommends that homeowners and businesses take steps to strengthen internal and external security.

In Missouri, if anyone witnesses or has information that may lead to the arrest of the people responsible for deliberately set fires, they can call the statewide Arson Hotline at 1-800-39ARSON. Tipsters may do so anonymously and rewards of up to $5,000 are available for such information.

Previous Post: « Royals feel the wrath of the Rays
Next Post: It’s called home plate, not home base (PODCAST) »