You are here: Home / Sports / Cards “Freese” the Braves 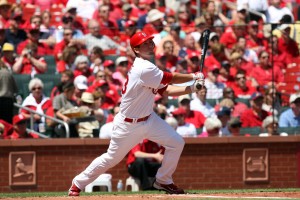 The Atlanta Braves remain ice cold having lost their ninth in a row thanks to a career day for Cardinals’ third basemen David Freese who had six RBI as the Cards sweep Atlanta with a 10-4. It was the fifth win in a row for the Redbirds.

Freese had only two extra-base hits in 18 games before hitting his first home run of the year, a three-run shot, in the first inning, and then he followed that with a three-run double that was part of a four-run St. Louis fifth.

On a day when Albert Pujols was given off and Adam Wainwright wasn’t his sharpest, others came up big. Wainwright went six innings allowing three runs on six hits with two walks. Wainwright only threw 78 pitches but got enough offense to move to 4-0.

The Braves hit a home run…it was the first given up at Busch Stadium this year by the Cardinals pitching staff.