You are here: Home / Sports / Catchers come up big in Cards win over Braves (AUDIO) 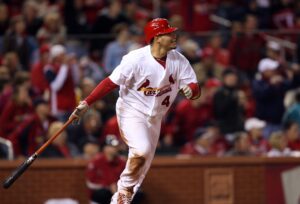 Molina watches his go ahead double in the eighth inning. UPI/Bill Greenblatt

Yadier Molina hit a go-ahead double in the bottom of the 8th inning to help the Cardinals rally for a 4-3 win over the Atlanta Braves Monday night at Busch Stadium. Molina also scored the tying run the in the seventh.

That game tying run came after backup catcher Bryan Anderson hit a two out double. That made the score 3-3 after Colby Rasmus hit his 6th homer to lead off the seventh off Braves starter Tim Hudson. After the game, Anderson from GM John Mozeliak that he was headed back to AAA Memphis.  Anderson talks about his night, plus Molina and Tony LaRussa comment on the young catcher.

Kyle Lohse got the no decision, keeping his team in the game while allowing just three runs. Former Cardinal Troy Glaus singled in a run in the third to put the Braves up 2-0. Atlanta added another run in the fourth and had runners on first and third with one out when Martin Prado lined into a double play when David Freese snatched the liner and threw to first to double off Yunel Escobar.  Lohse talks about coming back and keeping his team in the game.