The next USS Missouri is only weeks away from heading to open water and getting under it.

The SSN780, a Virgiinia-class submarine, will be the first Navy ship to carry our state’s names since the fabled BB-63, the World War II-built battleship that was in service through the first Gulf War and is now a privately-operated museum at the Pearl Harbor Memorial in Hawaii. 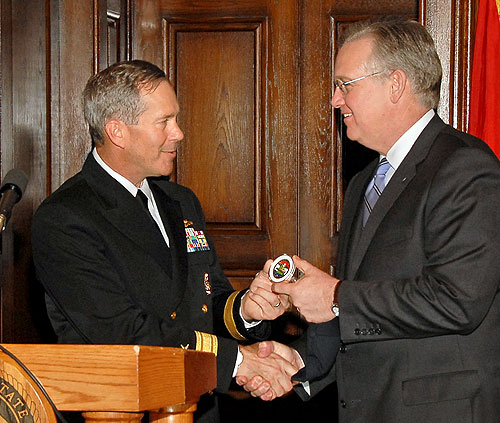 Rear Admiral Mike McLaughtlin, commander of the Navy’s Submarine Group Two, has briefed Governor Nixon and reporters on preparations for the ship’s commissioning on July 31. “You will be proud of Missouri when she is finally commissioned,” he said, and promised she would be around for a “good 33 years.”

McLaughlin says the Missouri will head out for sea trials next month or in June, during which time the crew will “wring out” the sub and make sure it performs properly. The Missouri not be armed during that trip. Its missiles and torpedoes will be loaded once it is considered a commissioned ship and the Navy takes control of it.

McLaughlin ways the crew has been with the ship for some time and is now honing its skills either on board or in shore-based stimulators he says can simulate about all at-sea conditions.

The submarine was christened in early December in Groton, Connecticut.