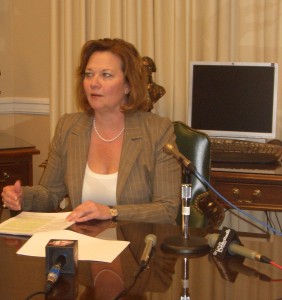 A state audit discloses that redemptions of tax credits approved by the state legislature have exceeded estimates by more than one billion dollars.

“It’s very difficult,” Montee tells reporters gathered in her office. “It is difficult to do that. That’s where I said we find that the agencies routinely overstate the benefits.”

The Historic Preservation tax credit stands out due to its size. Projected to cost $71 million, it has grown to nearly $640 million. Montee says its economic impact varies greatly depending on the project.

“When our office put out the Historic Preservation tax credit report, we looked at commercial versus residential. And we found that commercial had significant economic benefits, but we found the residential did not have what they were projecting out,” according to Montee.

The Missouri Low Income Housing tax credit also grew well beyond projections. Estimated to cost slightly more than $61 million, the tax credit has ballooned to more than $400 million. A Brownfield Remediation/Demolition tax credit had been projected as a small program, expected to cost only $3.5 million. Redemptions the past four years have exceeded $90 million.

While Montee states that it is difficult to quantify the economic benefits of certain tax credits, those credits specifically designed to create jobs haven’t grown. Missouri Quality Jobs, touted as the state’s top economic development lure, has fallen well short of projections. Lawmakers made room for redemptions of $124 million. Slightly under $11 million had been redeemed during the four-year period, leaving $113 million available. Only $57 million of the $88 million set aside for the Neighborhood Assistance tax credit program has been redeemed while a mere pittance, $2.2 million, of the $55 million designated for the Enhanced Enterprise Zone has been cashed in.

The report comes amid much debate about tax credits at the Capitol. Certain state senators loudly complained about the cost of tax credits and questioned whether they generated the economic activity claimed by supporters. Governor Nixon has joined in the criticism, calling to tax credit reform.

House Speaker Ron Richard (R-Joplin) has resisted, stating that a more thorough study should be undertaken prior to legislative action to rein in tax credits. After Montee released the audit, Richard’s office released a written statement.

“Auditor Susan Montee and Governor Jay Nixon are playing a dangerous and damaging political game creating a fictitious conflict between education and Missouri jobs. Education and economic development are mutually beneficial, not mutually exclusive,” Richard stated. “In the House, we have always welcomed independent, objective scrutiny on how to best reform and enhance tax credit programs. Missourians need jobs. Therefore, the Missouri House will continue to protect responsible economic development programs that create those jobs. And we will have the last word on this matter.”