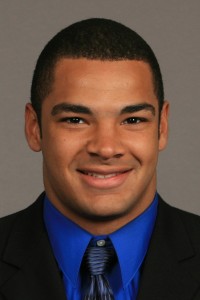 Missouri State tight end Clay Harbor was selected Saturday as the 125th pick in the 2010 NFL Draft when the Philadelphia Eagles called his name as the 27th selection of the fourth round.

Harbor became the 16th Bear ever drafted by a National Football League team and the first since 2000. He is the second-highest MSU pick ever with Tom Mullen going as the 28th overall pick to the Giants in 1974.

“It has been a crazy day,” Harbor said. “I was getting a little worried as they got deeper in the third and fourth round, but it was a great feeling when my phone rang. I found out the Eagles were picking me about two minutes before everybody else did, so it happened really fast. I am just really excited to go to Philadelphia and help the Eagles and thank them for the opportunity to fulfill a dream.”

Harbor earned Division I FCS first team All-America honors in 2009 from The Sports Network, Associated Press, Walter Camp Football Foundation, and The College Sporting News. He also was named to the All-Missouri Valley Football Conference first team for the third consecutive year and earned a spot on the MVFC All-Silver Anniversary team.

In 2009, he had 59 catches for 729 yards and 4 touchdowns. He had the most receptions by a tight end in the Missouri Valley and second-most nationally. He also led all tight ends nationally in receiving yards per game (66.3). He ended his Bears’ career as the school’s all-time receptions leader (150) and was third in career receiving yards (1,906). He finished with receptions in 33 consecutive games to tie an MSU record and notched four 100-yard receiving games this season and six for his career, which also tied institutional records.