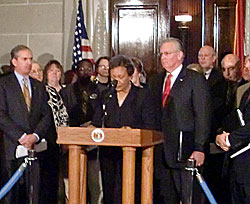 Surrounded by education leaders from across the state, Governor Jay Nixon calls on the legislature to pass tax credit reform before the end of this session.

At a press conference in front of his office Wednesday (video after the jump), Nixon pointed out that in 2009 Missouri spent the most money of any state in the country on historic preservation tax credits, totaling $180 million. He says credits like those need to be scaled back or have more requirements, so that money can be better used elsewhere.

“We’ve got to shift off of the current method which is basically an entitlement. I mean you can, in essence, if there’s something that’s on the historic site you can in essence pull a back hoe up and start digging and we gotta start reimbursing,” Nixon said.

Missouri spent also spent the second most of any state on low income housing tax credits in 2009, $176 million.

“California, with a population six times the size of Missouri, awarded half as much,” Nixon said.

He says some of the 60 active credits, of course, have value to the state and its residents, but they simply need to be kept in check and ‘calibrated.’

Nixon says over the past 10 years, the use of state tax credits has grown by 86%, totaling $585 million last year. He says it’s important to spend state money where there’s the best return on investment, and he says education tops that list.

State public education leaders from the elementary to graduate level joined Nixon for the press conference in support of tax credit reform.

“We are at a tipping point. We’ve had a decade of underfunding the requirements we have to provide high quality public education to Missourians. The question is, in this budgetary time, where is that money going to come from?” said Gary Forsee, President of the University of Missouri system.

“Every dollar we spend on tax credits is a dollar that isn’t available for our universities to invest in the next generation of teachers, doctors and engineers. The value of tax credits must be weighed against their cost to our classrooms, out colleges and other vital state services. In the zero sum game we live in in the state budget those numbers add up quickly,” Nixon said.

Nixon thinks a bill sponsored by Senator Dempsey addressing this issue has the best chance of passing. He also says he believes there is enough time to get this through the legislature, despite that fact that the session ends in roughly three weeks.