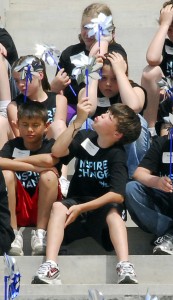 School children planted rows of pinwheels at the Capitol to create a garden, which is on display through Friday. Organizers said it was a whimsical demonstration to draw awareness to a serious topic — child abuse.

The pinwheel garden was set up by Kids First, which is talking to legislators and the public about child abuse.

The Dept. of Social Services Childrens’ Division says rates in abuse aren’t necessarily spiking, but the domino effect of job loss, a down economy, substance abuse and other triggers are resulting in more first-time offenders abusing children … and the abuse victims showing up in the E-R are littler.

Rebecca Gordon with Kids First says they’re asking people to “be aware … one in four girls and one in six boys are sexually abused … if you think of a classroom … people say ‘we don’t see that,’ but the numbers prove it does. Be aware, understand what child abuse is and get over the fact that it doesn’t happen here, because it does.”

Paula Neese is the Director of the Childrens’ Division. She says amid state budget cuts, advocates are relying more on community resources and faith-based organizations to help. Even neighbors helping neighbors, she says.

Neese adds that younger parents seem to be more at risk as many are uneducated about the development of children, for example, babies go through phases when they cry … a lot. Neese says some young parents get frustrated and lose control. [Video of Neese’s remarks]

Efforts to increase awareness about abuse and prevention will be ongoing throughout April.

Today is “Go Blue Day,” thousands will be wearing blue shirts and clothing to raise awareness about abuse.