A bust of James Smith McDonnell Jr. has been unveiled for the Hall of Famous Missourians in the third floor of the Capitol rotunda.

McDonnell founded McDonnell Aircraft in 1939 and led the company until his death in 1980.

The McDonnell Company not only produced fighter jets for the American war effort, but also built the first spacecraft to carry an American into orbit. 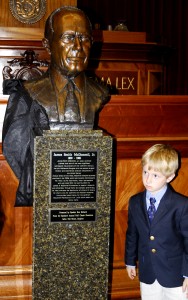 His family, who was on hand today to celebrate his heritage and his stature as a famous Missourian, reminisced about his aviation genius as well as his kind spirit. They recall “Mac” as an interesting man who settled in St. Louis, where his family still lives.

The youngest on hand to celebrate “Great Grandpa Mac” was little Mac, who said the House Chamber was his favorite part of the Capitol. 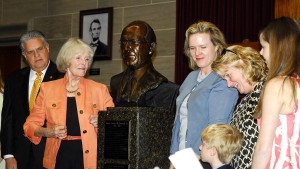 McDonnell’s roots were in Colorado and Arkansas, that even, as Twain put it, “George Washington was a Missourian. He was that, not by accident of birth, but by his primacy in the achievement of liberty and the other great things he did for his country. That made him a Missourian. Caesar was a Missourian. They are all Missourians by right. Abraham Lincoln, Robert E. Lee, General Grant – they are all Missourians by right of their achievements. We have soldiers in plenty by that right. John Hay has by that right become a half Missourian. He lived in that state for a short time. I, in my quality as lay preacher, say live your lives in virtue, that when you come to lay your life down you shall not descend, but ascend – to Missouri.”

Twain, for the record, was the first bust to be installed in the Hall of Famous Missourians in 1982.

McDonnell merged with Douglas aircraft in 1967 and became part of Boeing in the ’90s.

To view an interactive map of the Hall of Famous Missourians, visit http://www.house.mo.gov/famous.aspx