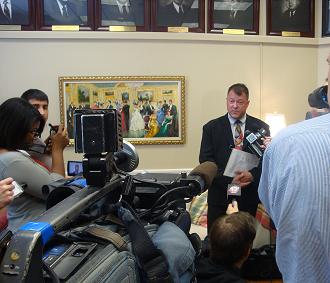 State Auditor Susan Montee says a former accountant with the Missouri Veterans Commission embezzled $107,000, and it appears she might get away with most of it.

A week before the auditor’s office was set to check the MVC’s records for state-issued fuel and procurement cards back in 2008, The commission found out that Stacy Griffin-Lowery used her state debit card from 2006 to 2008, racking up just more than $17,000 in personal charges. Instead of possibly facing felony forgery charges, she pleaded guilty to a misdemeanor charge back in 2008 and repaid the $17,000. Now, a state audit shows Griffin-Lowery also allegedly charged the state for cash advances on her personal credit card to the tune of $90,000. Montee says Cole County Prosecutor Mark Richardson doesn’t plan to pursue any more charges; so Griffin-Lowery may get away with the $90,000.

“That is what we were told. They were told they worked a plea agreement that would have included anything, whether they knew it or not. She actually pleaded guilty in June of ’08. We hadn’t even finished the audit so as to why that was included, we did have someone look at it and I’m certain there is some possibilities of filing additional charges. I just would hope that if there is an additional way of doing that it gets investigated,” Montee said at a press conference Monday.

Richardson told the Missourinet that he does not have legal grounds to file additional charges. He says his hands are tied because of the plea agreement based on a sum of roughly $17,000, which was based on information from both agencies.

“(During the original prosecution) our office did make a request that the agencies present us the total amount of funds stolen so that we could cover that in our prosecution because we’re limited to one prosecution per conduct, and we got those numbers from the Missouri Veterans Commission and an additional number from the Missouri State Auditor’s office,” Richardson said.

MVC Executive Director Larry Kay says at this point his department is trying to recoup the money through a state bond that he believes serves as a form of insurance for an incident like this one. If that were successful, the money would go back into the state’s general fund. But that money would not have come from Griffin-Lowery.

Montee says a lack of spot-checks inside the MVC allowed this to happen, and Kay says they have made some changes.

Kay blames a tight budget, saying the MVC could not afford to pay someone to make regular checks of the debit charges and expense reports. He says they will now be doing regular and random spot checks to combat fraud. Montee says those types of checks should not have been very labor-intensive in the first place.

“Unfortunately we want all of our auditors all to know how that stuff is done because that’s how we discover fraud out in the field. So we just have to rely on our people to have some integrity and we generally have that,” Montee said.