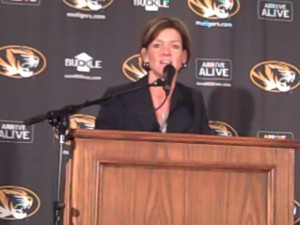 The University of Missouri made the formal announcement today,  that Robin Pingeton, who was head coach at Illinois State, is the next women’s basketball coach at Mizzou.  Pingeton led the Redbirds to the NCAA tournament in 2005 and 2008 and this season Illinois State made it to the semifinals of the WNIT. Pingeton was 144-81 and has won the last three Missouri Valley Conference titles.

The newspaper in Bloomington-Normal reported that Pingeton met with her players at Illinois State last night and will meet with the Mizzou players this evening after the formal press conference today.

Pington is 41 years old and was an assistant at Iowa for three seasons before going to Illinois State. She also coached eight seasons at St. Ambrose, an NAIA school in Davenport, Iowa.