On the heels of the announcement that 300 jobs will be cut at Fulton State Mental Hospital a group of government employees is taking their case the Governor’s office.

The American Federation of State, County and Municipal Employees hand-delivered 2,500 petition cards to Governor Nixon’s office Thursday; pleading with him to find other ways to cut the budget besides trimming social services. John Noonan says the group did offer other options including re-negotiating state service contracts, eliminating special tax breaks and getting rid of a 2% tax break for corporations that file on time.

“We’re the only state the does that now. It’s an antiquated measure because they can file on time very easily now, and there’s significant savings there. It’s not enough to close $500 million, but if you add those things up and believe me there’s more out there, you start talking real money and real jobs,” Noonan said.

“Those are beds that are so important to making sure that people don’t end up in the long term psychiatric facilities that end up costing the state so much more money. It’s really a case of being penny wise and pound foolish,” Noonan said.

Karen Morts works at the Hospital and says these systems are in place to prevent even larger social problems.

“(Some of the clients) have forensic records and so that makes this doubly so more important,” Morts said.

The state estimates the cuts at Fulton would save about $7 million next year. The AFSCME says that’s just slightly more than the state doled out in tax exemptions for yacht buyers last year. 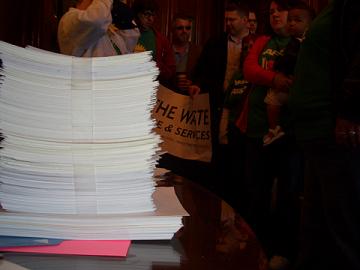