The power of an incumbent President to raise campaign funds for others  has paid off for Senator McCaskill, who had President Obama as the star of her fund-raising event last night in St.Louis. Tickets cost 25-dollars to 25-thousand dollars to attend with the big donors getting up-close to the President and the smaller donors getting to stand next to a wall. 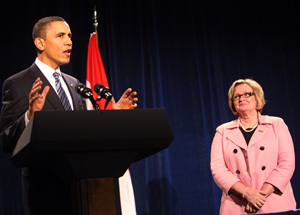 McCaskill says some of the money will go into her campaign war chest but a lot of it will help with candidates in this year’s elections. She’ll have to wait for the final accounting before she knows how much she’ll get and how it will be spent. [Audio after the jump]

President Obama spoke highly of McCaskill at his speech earlier in St. Charles, praising her work in cost-cutting and for making the use of private contractors a public issue.

One of the bigger beneficiaries of the evening will be Secretary of State Robin Carnahan, the leading Democrat in this year’s race to replace Senator Bond. Carnahan was not at Obama’s St. Charles event, prompting some speculation among television pundits, including CNN’s Wolf Blitzer who referred to her several times during his coverage of the event as “he.” McCaskill says Carnahan was in Washington in her position as Missouri’s Secretary of State, attending meetings on financial regulation. “Anybody who wants to make something of this (has) too much time on their hands,” said McCaskill.