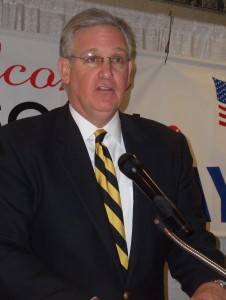 Missouri Democrats have gathered in northeast Missouri for Hannibal Days, their traditional kick-off of the political season.

Governor Nixon, prior to a brunch this morning, touted the accomplishments of his administration during a very difficult budget year. Nixon said that state government had gotten much done in his first year in office; approving a jobs bill, a program to make it easier for small businesses to secure loans, full funding of public schools and a freeze on college tuition. He said he was proud to balance the state budget without raising taxes.

The governor outlined new programs, such as one that uses federal money to pay youth to work in the state’s parks, another attempting to secure federal funding to extend broadband internet connections to rural Missouri and grants to help community colleges train workers in various fields.

Democrats might control Washington, having both the White House and Congress, but the political environment Nixon faces is much different. Republicans have firm control of both chambers in the General Assembly, forcing Nixon to work with the opposition party to get anything done.

Nixon seemed to refer to some of the criticism he has taken from Republicans in the General Assembly when he told the gather he would not be distracted from the task at hand.

Nixon said that this is not the time to find the best wedge issue to divide the state and win elections.

“This is about thinking of ways to make progress,” Nixon said. “Right now, at this time, as we begin to emerging out of this recession, as we begin defining an economy for the future, as we begin transforming our educational system to deliver the jobs of the future, now is the time in which Democrats have a responsibility and obligation to do exactly what we said we were going to do during the elections which is work together to move this state and country forward and as long as I’m your governor, we will.”