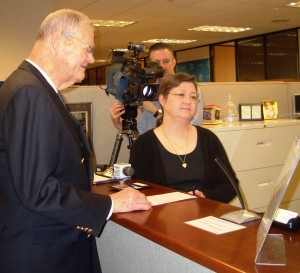 “Number one, I enjoy what I do and I also know there is a great deal of work left to be done,” Skelton said after signing papers in the Secretary of State’s office in Jefferson City. “I’ve been successful in the past. I would like to accept the challenge for Missourians and for Americans.”

Skelton says there are two main issues this election year. He says the top issue is the economy and says Congress must work to help create jobs. Skelton says the war on terror is the second biggest issue in the campaign, with the war in Afghanistan vital to that. Skelton, who serves as chairman of the House Armed Services Committee, says he’s proud of the work America’s military men and women are accomplishing in Afghanistan.

Skelton has faced only token opposition in the past few election cycles. This year will be different. Among the six candidates in the Republican primary are State Senator Bill Stouffer of Napton and former State Representative Vicky Hartzler of Harrisonville, as well as former Jefferson City Councilmember Roy Viessman. Democrat Leonard Steinman of Jefferson City has filed to oppose Skelton in the Democratic Party. There is a Constitution Party candidate as well, Greg Cowan of Lebanon.