You are here: Home / Sports / Missouri State holds off Evansville 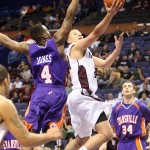 Adam Leonard’s three-pointer with 30 seconds left gave the 7th seeded Missouri State Bears a 52-46 win over Evansville in the first round of the Missouri Valley Conference Tournament in St. Louis late Thursday.

After taking a narrow 26-24 lead into the intermission, the Bears missed their first eight shots of the second half and fell behind 34-28 after a three-pointer by Ned Cox with 14:04 to go.  Evansville led until just over seven-and-a-half minutes to play when Will Creekmore was fouled by James Haarsma while converting a layup to put MSU on top 38-37. Creekmore missed the ensuing free throw, but the basket closed out a 10-3 run by Missouri State. 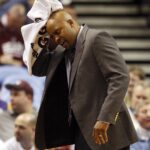 Cox made two free throws after a bump foul on Kyle Weems 15 seconds later to hand the lead back to UE briefly, and Weems avenged the call by knocking down his third three-pointer of the game moments later to give the Bears a 41-39 advantage.

Back-to-back baskets by Caleb Patterson and Jermaine Mallett built the Bears’ lead to 45-39 with 5:33 on the clock, but the Aces stormed back again. A three-pointer by Colt Ryan, short jumper by Kavon Lacey and pair of free throws by Denver Holmes helped Evansville retake a 46-45 lead two minutes later.

Weems would pick up a pair of free throws to put the Bears back on top on their next possession before Leonard’s critical trey with 30 seconds left sealed the win. Weems and Mallett combined to make 3-of-4 free throws in the final 14 seconds to secure the win.

Listen to comments from head coach Cuonzo Martin below and for more on the Bears, click here.