Senator McCaskill has just visited Afghanistan and Pakistan as part of a Congressional Delegation trip. McCaskill headed to the Middle East to visit Missouri troops, focus on oversight of government contracting, and discuss national security. 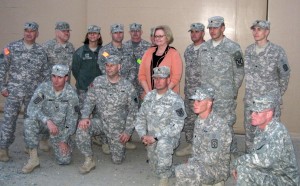 Sen. McCaskill with troops in Kuwait.

She says she’s hopeful about the new offensive in Afghanistan. A big difference, she says, is the sense of internationalism.

McCaskill says she caught up with Missouri troops working on bringing equipment from Iraq to Kuwait, where it’s sorted, inventoried and either sent on to Afghanistan for use there or returned to the U.S.

She adds that there was almost no contracting oversight by the Department of Defense in the rebuilding effort in Iraq.

“We want to make sure that, since that property was never located and accounted for, equipment is either being sent back to the U.S. or refurbished and sent on to Afghanistan for use there,” she says. Referencing the international interst, she discussed meeting with German commanders and memorializing several Finns and Swedes that were killed on the front.

“While in Afghanistan, McCaskill participated in a series of meetings with military and government officials as well as civilians related to oversight of contracting issues. She observed Afghan police training, a program she has been investigating through her Subcommittee on Contracting Oversight. Serious accusations of waste and fraud have been raised against the contractor responsible for both the Iraqi and Afghan police training programs. While in Pakistan, McCaskill met with government officials as well as the Pakistani Prime Minister to discuss international security issues and nuclear security,” her office reports.

When the Missourinet talked to McCaskill, she was in in India to discuss strategic regional security concerns and international trade issues. She was accompanied on her trip by Senator Jeff Merkley (D-OR) and Congressman Baron Hill (D-IN).

Following are McCaskill’s trip stops in the Middle East. To hear her talk about the trip, click the link below:

o Meeting with Governor Atta of the Balkh Province of Afghanistan