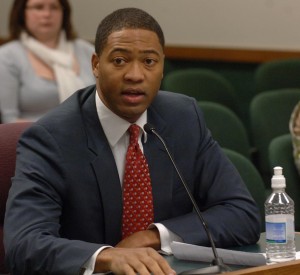 Concern has been growing about the impact head injuries might have on young athletes. The state legislature just might act.

Head injuries, in particular, concussions might have more of a lasting effect on student-athletes than previously thought; all student athletes.

“And it’s not necessarily a football. I want to make it very clear that this is not specifically about football,” said Rep. Don Calloway (D-St. Louis) in testimony on HB 1548 before the House Healthcare Transformation Committee.

Calloway told committee members high school athletes in nearly all sports can suffer from concussions. He said there has been a high rate of incidents in girls’ soccer. Calloway’s bill

would require that high school athletes who suffer a head injury undergo an examination by a licensed health care provider before being cleared to return to play.

Dr. Mark Halstead with the Washington University School of Medicine in St. Louis urges lawmakers to take the issue seriously.

“It’s scary to think about A students becoming C students, but I unfortunately see that as a result of concussions in my office on a weekly basis,” Halstead told the committee. “Athletes have been shown to suffer from Alzheimer’s-like symptoms or dementia as they get older as a result of being careless taking care of their head. And that’s not something I want any family to deal with if we can reduce the likelihood of it.”

The Director of Adult Neuropsychology at the University of Missouri-Columbia, Thomas Martin, testified that head injuries can be especially damaging to a young athlete, because the brain is developing. He said that multiple concussions could have long-term, damaging ramifications.

The bill would also require school boards to work with the Missouri State High School Activities Association on guidelines for dealing with head injuries.

MSHSAA Executive Director Kerwin Urhahn testified that the organization has been working on guidelines which is hopes to have in place by the 2010-2011 school year. Urhahn said there isn’t any piece of equipment that can prevent concussions. He said it was the job of MSHSAA and everyone associated with high school athletics is to make sure coaches are aware of the warning signs and the dangers of head injuries so that they don’t allow young athletes to begin competing too soon after a blow to the head.