You are here: Home / Sports / Blues lack bite and lose to Sharks 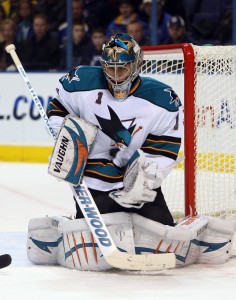 After beating the Blackhawks on the road on Wednesday, the second place team in the Western Conference, the Blues turned around and played the top team in the conference Thursday night and came up flat losing to the San Jose Sharks 4-2.

Sharks’ rookie backup goalie Thomas Griess made 35 saves including this one in the first period. Griess had plenty of offensive support as Patrick Marleau scored in the first minute beating Ty Conklin who is now 0-6 in games at The Scott. It was Marleau’s 38th of the season, tying him for the NHL lead.

Ryane Clowe made it 2-0 in the first period, but Patrik Berglund scored on a power play goal less than two minutes later to pull to within one after the Sharks got called for interference.  It stayed 2-1 late into the second period when San Jose scored on a power play goal. In the third period, Alex Steen scored his 13th of the year at 8:39 to make it a 3-2 game, but the Sharks iced the game with a goal at the 15:12 mark by Scott Nichol. The Blues outshot the Sharks 37-31 and fall to 9-15-5 at home.

The Blues will take on Chicago on Saturday night.