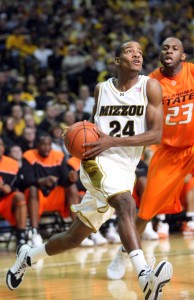 Missouri Tigers Kim English (15) moves past Oklahoma State Cowboys James Anderson for two points in the first half at the Mizzou Arena in Columbia, Missouri on January 30, 2010. UPI/BIll Greenblatt

The Missouri Tigers extended their home winning streak to 32 games at Mizzou Arena with a 95-80 win over the Oklahoma State Cowboys on Saturday in front of a sold out house. Five Tigers scored in double figures led by Kim English’s 20 points as Mizzou moves to 16-5 overall and 4-2 in the Big 12.

The Tigers jumped out to a 25-10 lead in the first seven minutes of the game sparked by English who scored 11 of those points thanks to two, three pointers and an old fashion three point play. OSU made the first of two big runs to get back in the game going on a 12-0 run to cut the lead to 25-22 with 7:45 to go in the first half, but Missouri quickly built the lead back up to ten in just a minute thanks to a great give-n-go bucket by JT Tiller, a three from English and a dunk from Bowers off an alley-oop pass from Tiller. 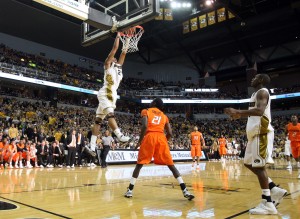 Missouri Tigers Laurence Bowers dunks the basketball in front of the Oklahoma State Cowboys in the first half at the Mizzou Arena in Columbia, Missouri on January 30, 2010. UPI/BIll Greenblatt

The Tigers went into the break up 42-24, but OSU’s James Anderson who had just 8 points in the first half, responded over the first five minutes of the second half by scoring 15 points to pull the Cowboys to 52-51 with 14:58 to play. Anderson, who has scored double digits in 35 straight games finished with a game high 31. However, from that point on Mizzou pulled away going on a 16-2 run and building up their lead by as many as 19 on two occasions.

The Tigers were drilling three pointers the whole game finishing 17 of 31 lead by Michael Dixon who was 4 for 4, Zaire Taylor who was 3 of 4, Laurence Bowers was 2 for 3, Marcus Denmon was 4 of 8 and English 4 of 10. Bowers finished with 16 points, Taylor 14 and Denmon and Dixon with 12 each and it was those two who stepped up big during the Tigers big second half run.