The Truman Library and Museum in Independence is the last stop in the U.S. for Pulitzer Prize photographs before they leave the country. 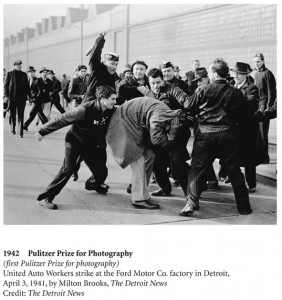 There are 139 photographs on display at the Truman Library and Museum, and Missourians have one more week to view them before the exhibition travels to Korea.

Museum Curator Clay Bauske says people who view the photos are immediately taken back to the moment when history was made.

Bauske says the Iwo Jima photo holds a special significance for the Truman Library because the model for the sculpture is part of the museum’s collection.

The photos span from 1942 to present day. The exhibition takes viewers not only through time, but through tragedy as well as celebration all over the world. 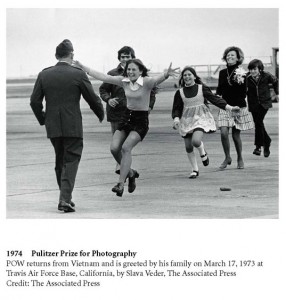 The exhibition begins with the first Pulitzer Prize photograph: “Battle on the Picket Lines,” by Pete Brooks with the Detroit News. The photo captures “the fury and the power” of breaking a picket line.

There 139 exhibition goes to Korea next. The exhibit is at the Truman Library for one more week.

The Pulitzer Prizes are journalism’s most prestigious award. Each photo is accompanied by a brief description of the event, as well as a desciptive about their feelings on the photo.

“These classics of photojournalism capture defining moments of our times. They bear stark witness to war and brutality. They honor heroism, compassion and the strivings of ordinary people for better lives. And behind each indelible image is a second, moving tale: the story of how each photographer made the picture that won the prize.” 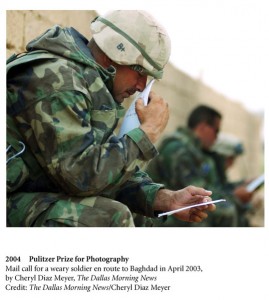 “The photographs illustrate the enduring power of the still image.”

For more, and to view more photos from the exhibition, visit http://www.trumanlibrary.org/pulitzer/.