Inside a small conference room at a Hannibal hotel, former Cardinal Jack 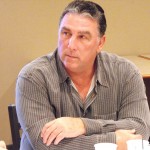 Clark sits down to talk about what else, baseball. One of five Cardinal Caravans of current and former Redbirds made a stop Saturday afternoon in Hannibal.

For most Cardinal fans, Jack “the Ripper” is best remembered for his ninth inning three run blast off Los Angeles Dodgers pitcher Tom Niendefuer in game six of the 1985 National League Championship series. The Cardinals would go onto beat the Dodgers, but would lose in the World Series to the Kansas City Royals.

Right away, the first thing you notice about talking with Jack, is that he is just Jack. He is very easy and laid back. As he talks, he is straight and direct to the point.

The first question posed is about the recent comments he made about the big sports news, or maybe more like already known sports news from last week, the admission of steroid use by former Cardinal Mark McGwire.

Clark does not shy away or back down from what he said about not only McGwire, but other players who have come out and said that they used steroids during their playing career. Clark is very up-front in stating that what McGwire said was not a new revelation.

Clark then goes on to explain that what McGwire said, being a former Cardinal, has an impact not only on the team now, but on the history of the franchise. He finishes the steroid chat by stating he has not faced any scrutiny from the Cardinals about his comments.

The conversation then switches to this year’s outlook for the St. Louis Cardinals. Right away, Clark focuses on the off season work by the Cards to keep Matt Holliday and sign pitcher Brad Penny.

Clark goes on to say that the Cardinal lineup is going to be a dangerous one, and maybe one of the best in the game. He knows they are going to score runs, play good defense, and will get great starting pitching.

He then spends some time talking about the bullpen and the pitching rotation for St. Louis. He says the starters look like they will once again be very strong, with the only question mark right now being who will take the fifth starting spot.

The last part of the conversation is about Clark and any aspirations he may have to coach again at the big league level. He was a former coach for the Los Angeles Dodgers, and spent some time last year coaching at the minor league level.

Clark says he would love to be back in Major League Baseball, but he is enjoying his time coaching in the minors and his other activities which include some television sports broadcasting work in St. Louis.

Previous Post: « Informal eco devo group looks at session and at future
Next Post: Census officials reach out to “hard to count” »