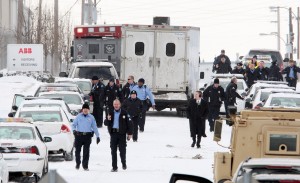 Police and emergency crews have converged on the scene of a workplace shooting at the ABB electric power company in north St. Louis. Preliminary reports from the scene indicate three people were shot just before 7 o’clock when a disgruntled employee walked in with an AK-47 rifle and started shooting. One of those wounded is reported to be a supervisor who was shot in the head.

The victims have been rushed to area hospitals – conditions unknown. The shooter has not yet been caught. Many employees are still inside the building, calling and texting family and friends.