You are here: Home / Sports / Holliday says he’s coming back to St. Louis 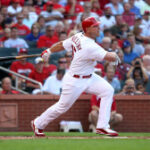 Matt Holliday appeared on ESPN radio and said that he is re-signing with the St. Louis Cardinals for seven years, with the money between $119 and $120 million. Cardinals GM John Mozeliak says it will officially announced to the media on Thursday after Holliday passes a physical.

The Cardinals picked up Holliday in July from Oakland and went on a tear hitting behind Albert Pujuols. In 63 games, Holliday hit .353 with 13 homers and 55 RBIs. However, in the playoffs, Holliday struggled at the plate hitting just .167 and dropping a fly ball in game two of the NLDS which allowed the Dodgers to rally and win.

Holliday’s deal comes after the Mets signed Jason Bay to a four year, $66 million deal and now sets the bar for what the Cardinals will have to shell out if they want to keep Albert Pujols past 2011. The Cardinals will pick up Pujols’ option that year for $16 million, which is the final year of a seven year $100 million contract.

So if Holliday’s contract is worth $20 million more than the current Pujols’ contract, what will Pujols garner after 2011? Fans, get ready to dig deeper in your pocket into your wallet…because someone will have to pay for these two guys.