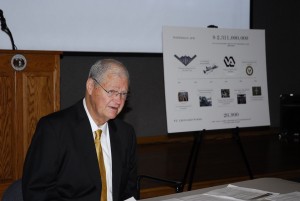 “Federal defense spending plays a huge role in Missouri’s economy,” he says. “Twenty-five years ago, I realized that strenghtening Fort Leonard Wood and Whiteman Air Force Base was in the best interest of local Missouri communities and America’s national security.”

He says this funding equates to nearly 30,000 jobs.

Defense contracts awarded to Missouri and surrounding states shows Skelton’s push for pumping up our military has paid off. Where Missouri has received $12 Billion, Illinois, Kentucky and Tennessee have gotten $3 Billion each; Iowa and Oklahoma $2 Billion, $1 Billion in Kansas and less than that in Nebraska and Arkansas.

“The presence of military in Missouri had a considerable impact on the state economy,” he says. “The presence of active military and civilian employees contributed $3.42 Billion to Gross State Product and $1.88 Billion to wage and salary income for Missouri.”