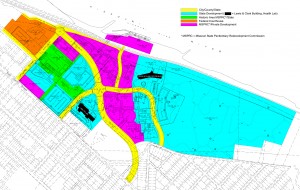 Office of Administration Commissioner Kelvin Simmons says the site will be developed cooperatively with local stakeholders, and that the plan designates areas of the 140-acre site for future use by private development and state government while providing preservation of critical historic structures. It also clarifies the location of streets and other infrastructure needs for the site. [Click here to download the PDF version of the map.]

“Gov. Nixon firmly believes the Missouri State Penitentiary site has tremendous promise for the future and great value to both the state of Missouri and the local community,” Simmons says. “We are taking an important step forward in the process of redevelopment by collaborating with Cole County and the City of Jefferson on a preliminary use plan which sets forth how the property can be used to best serve the interests of the people of our state.”

Simmons has signed on to a memorandum of understanding had previously been approved by the Jefferson City Council, the Missouri State Penitentiary Redevelopment Commission and the Cole County Commission earlier this month.

The property already is the site for two state buildings, and the new federal courthouse is under construction with completion expected in 2011. The plan released today details mixed use of the site; combining government use with private business while preserving a portion of the site’s past.

John Landwher, mayor of Jefferson City, says the vision is to eventually build a community there, not just a venue that opens at 8 a.m. and closes when it gets dark; he says incorporating housing into the plans idealizes that vision.

The City of Jefferson and Cole County will play an essential role in the development of the site, and have committed funding for infrastructure improvements. The state, city and county are developing an infrastructure improvement plan that will deal with streets, utilities and environmental remediation efforts — work to improve the existing roads and expand them is top priority.

“We are pleased Gov. Nixon and the Office of Administration have taken a critical step in this challenging project that is so important to the city and county. By defining areas that will be available for various types of uses, all the partners can move to the next stages of development within the designated sectors,” Landwehr says. “The site is so large that it can accommodate future state office needs along with privately funded commercial and retail amenities, and still have areas devoted to tourism and historic preservation. The challenge now will be to work toward fulfilling the promise this preliminary use plan provides.”

“The old prison site is a unique opportunity for economic development in our community and this is a big step toward realizing that growth in our core,” Ellinger says.

Construction of the old prison, initially, was authorized by the state legislature in 1833. The facility was the oldest continuously operating prison west of the Mississippi until it closed in 2004. This historic site has housed prisoners such as Sonny Liston, James Earl Ray, Pretty Boy Floyd, and “Stagger” Lee Shelton.

In 2001, the legislature created the Missouri State Penitentiary Redevelopment Commission, which has been working with the state, the county and the city to develop plans for the site.

The prison’s unique location, on the edge of Jefferson City’s downtown district, overlooking the Missouri River to the east of the Capitol, is a plus for developers and private interests looking to open businesses and attractions there.

The announcement sets aside a designated area for private business development, a primary interest of the commission.

Also included in the plan is space for a museum reflecting the site’s past as the site already has attracted tourism interest.

The Jefferson City Convention and Visitors Bureau has been conducting hard-hat tours of the site for several months.