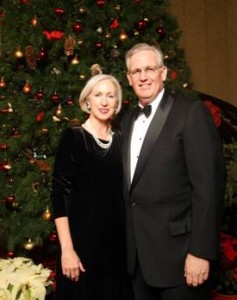 Simple elegance, with a bow to tradition, marks Christmas at the Governor’s Mansion in Jefferson City this year.

First Lady Georganne Nixon set the theme for the celebration of Christmas at the Mansion this year.

“This year, Christmas at the mansion has been a wonderful holiday so far,” The First Lady tells the Missourinet. “We’ve decided to focus on simple gifts as the theme. Because, when we really think about it, what the holidays mean is spending time with friends and family and simplifying the holiday.”

Christmas decorations abound at the Mansion, located east of the State Capitol. Decorations of greenery, poinsettias and fruit offer a warm and inviting setting at the home of the governor and First Lady. A large, traditional Christmas tree stands in a corner.

The First Lady says it’s been a privilege to move in.

“When I think about the Missouri Governor’s Mansion I see a lot of Missouri history encapsulated in one building,” Georganne Nixon says. “It’s been a joy to open these massive front doors to over 60,000 people this year, many of them being Missouri school children during their years of studying Missouri history.”

The Nixon’s chose to move into the Mansion even though they long ago established a home in Jefferson City during Governor Nixon’s time as attorney general.