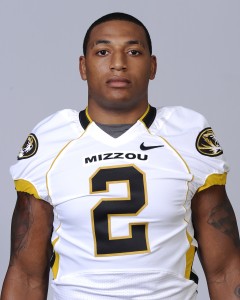 I was up at the University of Missouri for today’s practice and afterwards, head coach Gary Pinkel talked about Brian Coulter and the job this kid has done while at Missouri. The kid has been through a lot and maybe you haven’t heard his story, but it’s remarkable where he came from and where he is. For all of his hard work and perseverance, Coulter is one of three finalists for the Rudy Award.

The Rudy Award honors student-athletes who demonstrate exemplary character, courage, contribution and commitment to their football teams. The Rudy Award of course comes from the movie “Rudy” based on Daniel “Rudy” Ruettiger overcoming all odds while playing football at Notre Dame.

Here’s the bio on Coulter provided by the Rudy Award. Family violence spiraled out of control in his childhood home. His mother, in self defense, shot and killed his father. Coulter and his siblings were separated and forced into foster care. Then the harsh realities of Hurricane Katrina forced him out of the one positive foster care situation he found. Coulter didn’t just survive, though — he excelled. He worked hard and followed his dream of playing Division I football. Coulter went on to become a 1st team All-Region Junior College defensive end, before transferring to Missouri. But a foot injury caused him to tumble down the depth chart. Again, Coulter battled back, secured a starting role and became a dominant force on defense. With a maturity level that few of his teammates can match, Coulter never made excuses. His work ethic makes him a leader on the field and an inspiration to his teammates in the weight room and locker room. On campus, Coulter was the recipient of the Mizzou ROARS Courage Award, which is voted on by all the Missouri student athletes in recognition of outstanding courage and perseverance.

Previous Post: « Ethics rising as an issue for upcoming session
Next Post: Woods will never catch the Golden Bear »