You are here: Home / Sports / Brett is golden one more time in St. Louis 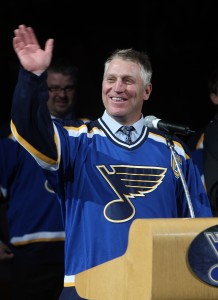 Last night the St. Louis Blues honored one of the best to play the game of hockey. It was Brett Hull night in St. Louis as many of the great players of not only the Blues, but the NHL came out and celebrated Hull’s induction into the Hockey Hall of Fame.

“I’m still baffled that those great Blues teams of the late 80’s and early 90’s could never hoist the Stanley Cup. Hull talked about playing with some of the greats. Before his pregame ceremony he talked about his time in St. Louis. . “From the greatest player that ever walked the face of the earth in Wayne Gretzky, to Brendan Shanahan, to Scott Stevens, to Adam Oates…to (Kelly) Chase and (Tony) Twist…good luck. You couldn’t beat us.”

The team also announced that they have commissioned a statue of Hull to join Bernie Federko and Al MacInnis outside the arena. They will also name a portion of the street around the stadium as Brett Hull Way. 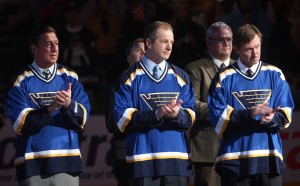 Listen to Hull’s comments during the ceremony.