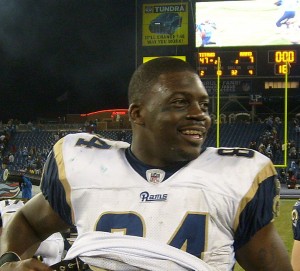 The Tennessee Titans scored early and often on the way to a 47-7 thrashing of the St. Louis Rams Sunday afternoon at LP Field in Nashville.

The Titans struck first just over 5 minutes into the game as Chris Johnson ran for the first of two touchdowns on the afternoon – a 39 yard run to cap a 4 play, 65 yard drive. Rob Bironas added the extra point and Tennessee led 7-0.

Tennessee added another major with seconds to go in the 1st quarter as a Johnson took off on a 66 yard run that had “highlight reel” written all over it. The 2 play, 82 yard drive was punctuated with Bironas’ conversion to put the Titans on top 14-0 at the end of one period of play.

The Titans upped their lead to 17-0 midway through the 2nd quarter as Bironas connected on a 27 yard field goal attempt. The drive was aided by a 44 yard run by quarterback Vince Young, who pulled a hamstring on the play and did not return. Kerry Collins took over at the helm for Young.

Tennessee extended the lead by another 3 points with 1:04 to go in the half as Bironas notched his second field goal of the day – a 34 yard successful attempt that put the Titans up 20-0. As if that weren’t enough, the Titans took advantage of a turnover to put themselves into scoring position and to allow Bironas to kick a 36 yard field goal and put the Titans up 23-0 as time ran out in the half.

Bironas hit his fourth field goal of the day in the 3rd quarter as he put it through from 50 yards out, making the score Tennessee 26, St. Louis 0.

A Keith Bulluck interception of a pass by Keith Null, who was making his first NFL start, gave Tennessee good field position again and the Titans took advantage of the opportunity, with Chris Johnson scoring his third TD of the day, scoring on a 3 yard run to cap a 23 yard touchdown drive in 7 plays. Bironas aced the PAT. Tennessee 33, St. Louis 0.

The final play of the 3rd quarter saw the Rams fake a punt, giving the ball to Kenneth Darby who ran for 51 yards to the Tennessee 13. It put the Rams in position for an 11 yard touchdown pass from Null to Randy McMichael to cap an 8 play, 68 yard drive. Josh Brown’s extra point made it Tennessee 33, St. Louis 7.

The Titans got it back halfway through the 4th quarter as Collins tossed a 4th down and 1 TD pass to Alge Crumpler to put the finishing touches on an 8 play, 61 yard drive. Bironas’ extra point made it Tennessee 40, St. Louis 7.

The rout wasn’t over yet. Vincent Fuller picked off a Null pass and ran it back for 6. Bironas’ conversion made it Titans 47, Rams 7. That’s how it would end.

Johnson led all rushers with 117 yards in 28 attempts. Darby led the Rams with 51 yards – all coming on the fake punt. Steven Jackson had 47 yards in 19 rushes. Quarterback Keith Null completed 27 of 43 passes for 157 yards but had 5 of his passes picked off.

The Rams (1-12) get back into action next Sunday, at home, against the Houston Texans.