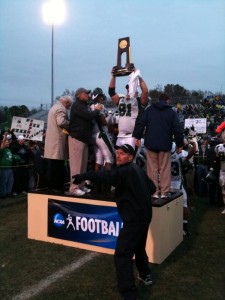 The fifth time was a charm as the Northwest Missouri State Bearcats defeated Michigan’s Grand Valley State Lakers 30-23 in the NCAA Division II Championship Game, Saturday afternoon, at Braley Stadium in Florence, Alabama. After four straight losses in the championship tilt, the Bearcats got out in front early and held the lead throughout the afternoon. The championship is the Bearcats’ third overall – their first since the second of a pair of back-to-back Division II titles in 1999.

The Bearcats wasted no time getting on the board, scoring on their first possession as LaRon Council ran it in from 14 yards out to cap 6 play, 76 yard scoring drive. Todd Adolf added the extra point and the Bearcats were out on top 7-0. 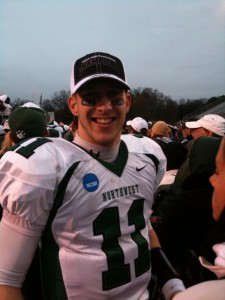 Northwest’s next drive was good for a major, as well. But they didn’t take it in until the start of the 2nd quarter. Quarterback Blake Bolles called his own number and ran it in from 4 yards out to end a 16 play, 97 yard drive. Adolf’s PAT made it NWMS 14, GVSU 0.

The next Bearcat possession saw Northwest Missouri score again. A 48 yard punt return by Jordan Simmons put the Bearcats in great position at the Laker 17 and LaRon Council scored his second TD of the afternoon as he found the end zone on 1 play that took only 5 seconds off the clock. Adolf’s PAT game Northwest a commanding 21-0 lead.

Northwest’s bid to wrap it up before the end of the 1st half ended when LaRon Council, on first and goal, had the ball ripped out of his hands by James Wojciehowski with 1:37 to go. The half ended with the Bearcats leading 21-0. 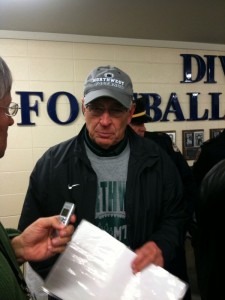 Grand Valley State struck pay dirt in the 3rd quarter as Brad Iciek completed an 8 yard touchdown pass to Andrew Lorman. But the conversion attempt was blocked by Northwest’s Kyle Sunderman and returned by Ryan Jones for 2 more Bearcat points. The Bearcats led 23-6.

The Lakers narrowed the score with 6:26 left in the 3rd quarter as Iciek connected with Ryan Bass on a 33 yard touchdown pass to put the wraps on a 4 play, 50 yard drive. Jay Jandasek’s extra point attempt was good and the Bearcats’ lead was cut to 23-13.

A Bearcat fumble gave the Lakers the ball at their own 29. The 3rd quarter ended with Grand Valley State down 23-13 and threatening with the ball on the Bearcat 26. GVSU scored with 12:26 to go in the 4th as Blake Smolen ran it in from 2 yards out to cap an 11 play, 71 yard drive. Jandasek’s extra point attempt was good and the Bearcat lead had shrunk to 23-20.

Northwest got its groove back as Bolles hit Jake Soy with a 26 yard TD pass on a 4th down attempt. The Adolf extra point was through the uprights and the Bearcats led 30-13 with 10:00 to play. The pass capped a 4 play, 32 yard drive.

The Lakers weren’t done, though, as they scored on their next possession. But they couldn’t score the TD and settled for a 21 yard Jandasek field goal to make it Northwest Missouri State 30, Grand Valley State 23 with just under 4 and a half minutes to play. The Bearcats failed to score on their next set of downs and turned the ball over the Grand Valley State. The Bearcats’ defense then held firm and prevented the Lakers from getting into position to tie the score. When Grand Valley State was stopped on a 4th down play with under a minute to go, the Bearcat faithful knew the championship trophy would be heading to Maryville.

Individually, Blake Bolles completed 15 of 23 passes, passing for a touchdown and running for one. He had one pass picked off. LaRon Council rushed for 172 net yards in 22 attempts, scoring a pair of TDs. On defense, Adam Vondrak scored took part in 11 tackles, 2 of them unassisted.