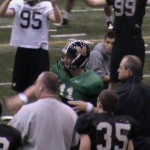 The Missouri Tigers held their first official bowl practice on Thursday inside the Devine Pavillion in Columbia.  This is  a busy weekend for the Tigers.  They will practice on Saturday and Sunday, plus the student-athletes are preparing for finals.  With the busy weekend, neither the players or coaches are really concerned about watching the  Army-Navy game on TV.  Of course, Navy is Mizzou’s bowl opponent.  Click here to watch the first team offense run 7 on 7 drills.

The first few practices are geared toward the second and third stringers.  It afford the coaches an opportunity to get the young players some extra work for next year, plus it allows the seniors, mostly starters to coach those under classmen.  The biggest question heading into bowl practices is the status of wide receiver Jared Perry who suffered a hairline fracture in his leg.

Head coach Gary Pinkel says he’ll have a CAT scan on Monday to evaluate his healing, but a lot of his progress is going to depend on Perry himself and how he feels and how much confidence he has in his leg.  The Tigers still have a couple of weeks and given Perry’s experience, he wouldn’t even have to practice at all and he’d still get an opportunity to play on December 31st.

Pinkel said they are just starting to look at Navy and with recruits coming in and practice this weekend, he’ll try to watch some of the game, but you have to remember as coaches, they don’t need to sit through a three hour game on television to learn Navy.  They know how to break down game film, so for us in the media who ask the players and coaches if they are going to watch the game, it’s not going to give the Tigers an edge whether or not they watch the game on TV.

Mizzou linebacker Sean Weatherspoon talks about his weekend and how to prepare for Navy.