It’s only 9,000 feet long, but it is making a huge difference for passenger rail service between Kansas City and St. Louis. 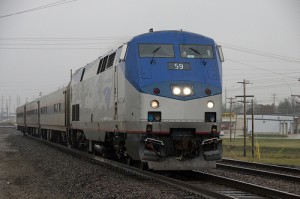 Griesheimer referred to the 9,000 foot spur laid down just West of California, built under a cooperative agreement between the state, Union Pacific and Amtrak at a cost of $8.1 million. That 9,000 feet of side rail allows freight trains to get over and let Amtrak passenger trains pass through. The difference it makes is astounding. Amtrak on-time performance between Kansas City and St. Louis, once lagging between 55-and-79%, hit 100% during the Thanksgiving holiday week.

State Transportation Director Pete Rahn says the project would not have been completed without a $5 million appropriation from the legislature.

“And that was a first time in which the General Assembly had supported a proposal to take public monies and invest into a private rail system,” Rahn said.

The state funding allowed Missouri to secure $3.3 million from the federal government to complete financing of the project.

Poor on-time performance has long been a criticism of Amtrak. It has hurt its ability to sell passenger service to Missourians and has been a point of harsh criticism in the state legislature. MoDOT has applied for federal economic stimulus funding to make other such improvements to the central Missouri railway. Officials say additional rail sidings at Knob Noster and Strasburg would improve on-time service.