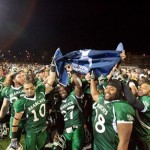 If you’re bummed about the BCS or the Missouri Tigers’ snub in the bowl process, then you need to watch Division II football this weekend. They do it the right way. They actually have a playoff system and The Northwest Missouri State Bearcats are headed back to Florence, Alabama for their fifth straight Division II National Championship Game appearance. Nevermind that the Bearcats lost the last four games, this is not Marv Levy and the Buffalo Bills. Mel Tjeersdma, the head coach has brought two national titles to Maryville, MO.

Let’s go back to the semifinal game against California University, Pennsylvania. The Bearcats were up 14-10 with less than a minute to go in the first half, when the Vulcans took a knee on third down at their own 35. Tjeerdsma called a timeout to force Cal U. to punt hoping to make something special happen. Well, it sure did. Northwest blocked the punt and took it in for a touchdown as time expired in the second quarter.

The Bearcats then marched down the field to start the third quarter with a touchdown and before the Vulcan knew what hit them, they were down 28-10. Any thoughts of a comeback were quickly squashed by Northwest. Cal U. scored a touchdown to make it 28-17 to feel like they had some life left in the game. What did the Bearcats do? Run the ensuing kickoff back for a touchdown to make the score 35-10 at that point. The game would end 56-31 to set up a rematch of the title games from 2005 and 2006 when Northwest Missouri lost both title games to Grand Valley State Michigan.

In 2005, Northwest lost 21-17 in its third-ever national championship appearance. With :01 second remaining and the ball resting on the Grand Valley 22-yard line, senior quarterback Josh Lamberson hit redshirt freshman Rapheal Robinson at the four, but time ran out as several GVSU defenders held Robinson from the goal line. The next year, in 2006, the Lakers beat the Bearcats 17-14 for the Bearcats only loss of the season. In that game, Northwest turned the ball over four times. In 2007, Northwest beat Grand Valley in the semifinal, but lost a third time in a row when Valdosta State scored a touchdown in the final 30 seconds to beat the Bearcats 25-20. Then in 2008, the Bearcats committed another four turnovers and lost to Minnesota-Duluth 21-14. That’s four losses, by a total of 19 points.

Head coach Mel Tjeersdma talks about those four losses, but more importantly how the Bearcats have always found a way to gain an advantage over their playoff opponents this season.

Listen to my Pressbox Podcast with Mel Tjeersdma.