The 15-year-old Central Missouri girl accused of killing a 9-year-old girl who lived nearby has pleaded not guilty in Cole County Circuit Court. 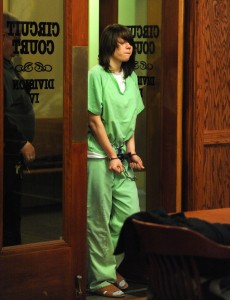 Bustamante sat silently during the hearing, which took just less than one minute. She entered the courtroom, shackled and handcuffed, took a seat next to King and hung her head, her long bangs blocking her face from view.

After the plea was entered, she murmered a brief exchange with King, and then was led out of the courtroom. She continues to be held in the Morgan County jail. Her attorney’s request to have her moved to a mental health facility in nearby Fulton, Mo., has not been addressed. 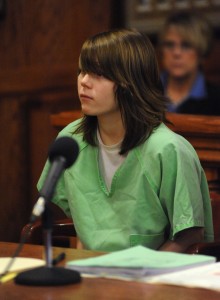 A status hearing has been set for Feb. 16 at 9 a.m. That’s when the attorneys in the case will tell the judge whether they’re ready to proceed with trial; Bustamante may or may not be present at that hearing. Any requests for change of venue might also come up at that time.

Bustamante is accused of killing 9-year-old Elizabeth Olten and burying her in the thick woods near the neighborhood in rural Cole County, St. Martins.

The case has garnered national attention, and the courtroom was filled with not only local media, but “Inside Edition” and others. This was the first time recording equipment was allowed in the courtroom for the Bustamante case.

Authorities who investigated the case say Bustamante led them to Olten’s body a couple of days after she was reported missing; reportedly, Olten had been dead since the night she had gone missing.

They say the slaying was premeditated and that the grave — two graves, in fact — were dug before the attack happened.

Olten died as a result of being strangled, having her throat cut and stab wounds.

Missouri State Highway Patrol Sgt. David Rice testified in the previous hearing that Bustamante had confessed, telling authorities leading the investigation that “she wanted to know what it felt like” to kill somone.

At that same hearing, Bustamante was certified to stand trial as an adult.