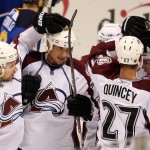 Making just his his fifth start of the season, Colorado Avalanche goalie Peter Budaj stopped 35 shots for his eighth career shutout as the Blues got shut out 4-0 as Colorado finished off a five game road trip.

The Blues have an NHL worst 5-9-3 home mark, and after coming up with two road victories that came from shootouts, they were hoping to carry that momentum at home. The Blues haven’t won three games in a row this season. It also was the third time the Blues were shut out at home. 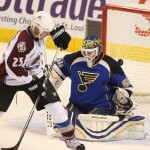 Colorado grabbed the lead late in the first period when Stewart deflected in Kyle Quincey’s point shot with 10.9 seconds left in the period to give the Avs a 1-0 lead. Colorado won a faceoff in the Blues zone to set up Quincey’s one-timer, which Stewart deflected up over Chris Mason’s left shoulder. (Photo by Bill Greenblatt, UPI)

Stastny gave Colorado a 2-0 lead 6:08 into the second by knocking in a rebound into an empty net after Mason was knocked from the crease by an Avs player. Stewart got his second of the game at 13:53 of the second, on another redirected shot. The Avs added their fourth goal of the game on a shot from the left circle, middle of the third period.