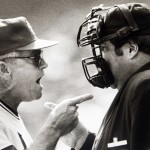 Former Royals and Cardinals manager Whitey Herzog, a six-time division winner and manager of the 1982 World Series champion St. Louis Cardinals, was elected to the National Baseball Hall of Fame at Baseball’s Winter Meetings in Indianapolis by the Hall of Fame Veterans Committee for Managers and Umpires.

Herzog led the Royals to three straight American League West titles from 1976-78 before leading the St. Louis Cardinals to the 1982 World Series title and the 1985 and 1987 NL pennants. He picked up 14 of 16 votes. Eight managers and two umpires were considered by the 16-member Committee during meetings held Sunday at Baseball’s Winter Meetings in Indianapolis. Twelve votes were necessary to gain the 75 percent necessary for election.

Herzog along with umpire Doug Harvey will be enshrined July 25, 2010, as part of the Hall of Fame Induction Ceremony, held in Cooperstown, NY. The two new members will be joined by any players elected by the Baseball Writers’ Association of America voting, with results announced on January 6. 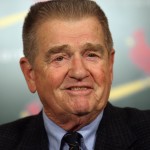