On a chilly and rainy New England December day, the Navy’s newest and most technologically-sophisticed boat has gained a historic name. 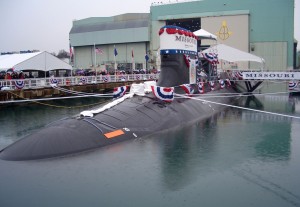 The 137 members of the crew stood in the open and in the rain on the aft deck of the sub for more than an hour as speaker after speaker extolled the efforts of the companies that built the boat and the heritage of the name it carries. Principle speaker Claire McCaskill, Missouri’s junior senator, told the sailors, “I know you guys like water, but this is ridiculous.” …

Former Warrensburg resident Becky Gates, now the wife of the Secretary of Defense, smashed the bottle of champagne from Hermann’s Stone Hill Winery on the front of the conning tower–the sail–of the new USS Missouri, a Virginia-class submarine.

McCaskill was one of a more than a half-dozen speakers….reminding the crew that “Missouri” is not just any old name for any old submarine.”

She told the crew and the audience, “This name is about a spirit, a mindset, one that is uniquely American. Missouri is the heart of this great nation.” And yes, she told the crew, being a Missourian is about “doggedness and just plain stubborness, not to back down in the face of any challenge.”

The sub is on track to be delivered to the Navy nine months faster than the last Virginia-class sub built at Groton. It heads out for sea trials in March and will be commissioned in August.