One of the most interesting of Missouri’s 2010 congressional races is the Republican contest in the 4th District, which stretches from mid-Missouri, south of the Missouri River, west to the Kansas border. While four Republicans – State Senator Bill Stouffer, former State Representative Vicky Hartzler, Brian Riley, and James Scholz – have announced their intentions to go after the GOP nomination to take on longtime Democratic Congressman Ike Skelton , only Stouffer and Hartzler had raised any money, according to the most recent Federal Election Commission (FEC) filings. 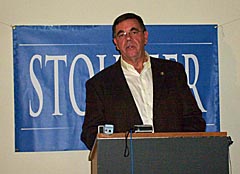 Stouffer, a Napton farmer, isn’t looking beyond Hartzler. But he believes he has more experience and can win in some of the district’s Democratic-leaning areas.

“I have a much broader base of experience than what Vicky has,” said Stouffer in an interview with the Missourinet. “Not to diminish anything that she’s done, but I have been a State Senator for five years, I’m the only one in the district that was on the ballot in 2008 – which was a tough Republican year. I got two-thirds of the vote in a Democrat district.”

Both Hartzler and Stouffer say they respect each other and acknowledge attention must be focused on next year’s party primary, but they direct their ire toward the incumbent.

“Ike [Skelton] has had the cover, for many years, of either a Republican President or a Republican Congress and he hasn’t had the opportunity to vote on some of these radical procedures and plans that are now being put forth by [U.S. House Speaker] Nancy Pelosi, and [U.S. Senate Leader] Harry Reid, and President Obama,” said Hartzler. “Now that those radical proposals are on the table we’re seeing that he’s not standing for up us. He’s voting for them.”

“Since Nancy Pelosi has been Speaker she has required her chairmen to vote with her and he has voted with her 95 percent of the time,” said Stouffer. “That does not represent the 4th Congressional district.”

Hartzler knows it is important to link Skelton with Pelosi because, she says, this is what concerns residents of the district.

“They’re very concerned with the leadership that this district is getting right now, that’s voting 97 percent of the time with Nancy Pelosi,” said Hartzler. “Those are San Francisco values. Those aren’t mid-Missouri values.”

Stouffer goes so far as to say polling that has been conducted gives him a legitimate shot at ousting the longtime incumbent.

“That [the polling] was prior to cap-and-trade, it was prior to health care,” said Stouffer. “The polls show that I have the best shot of any Republican in the district to do that.”

FEC documents indicate that in addition to the four Republicans and Democrat Skelton, Gregory Cowan has announced his candidacy for the Constitution Party nomination.