The race for Missouri’s 4th District Congressional race is heating up beyond the campaigning. A Warrensburg man has filed complaints with both the Federal Election Commission and the Missouri Ethics Commission regarding the campaign practices of Republican candidate Bill Stouffer, a State Senator from Napton.

Central Missouri University political science major Chris Brockway of Warrensburg, who identifies himself as a Democrat and a supporter of Congressman Ike Skelton, had the complaints notarized and filed on Monday. He alleges several violations of federal and state election and ethics laws. Included in the allegations is a complaint that Stouffer’s state committee, Friends of Bill Stouffer, paid $7,500 in consulting fees to Axiom Strategies of Kansas City. Brockway contends the consulting work had nothing to do with a possible statewide political campaign by Stouffer, but was actually an effort to test the waters for a congressional run.

Brockway’s closing paragraph in both the FEC and MEC complaints reiterates his concerns:

The Stouffer campaign has released a statement in response to the filing:

“The Stouffer for Congress campaign and the Friends of Bill Stouffer campaign has properly complied with all federal and state laws. Trumped up accusations from Democrat operatives is meant to distract folks from talking about Ike’s bad votes on cap and trade, deficit spending with Wall Street bailouts, so-called stimulus plans and his 95% voting record in support for Nancy Pelosi’s agenda. This kind of political smear is exactly the kind of Washington, DC politics rural Missouri is sick of and is yet another reason why Ike Skelton needs to go home after 3 decades in Washington.”

Both the Missouri Ethics Commission and Federal Election Commission are required, within five days, to notify Brockway of receipt of his complaint and to notify the Stouffer campaign that complaints have been received and will be investigated. 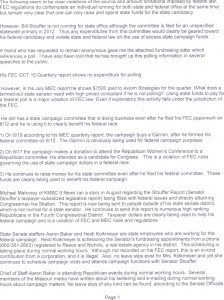 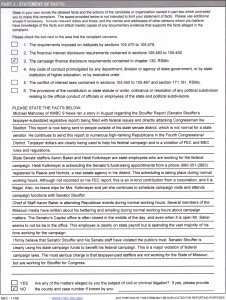 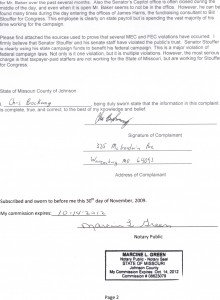 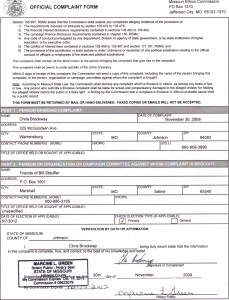